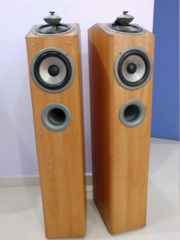 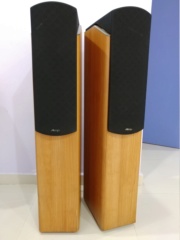 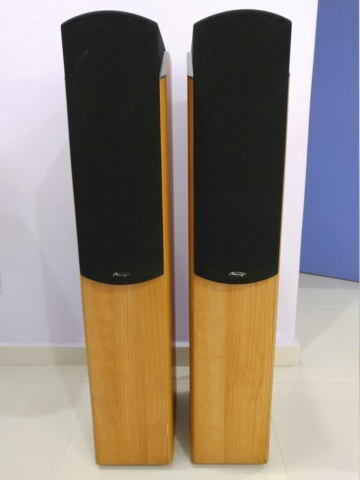 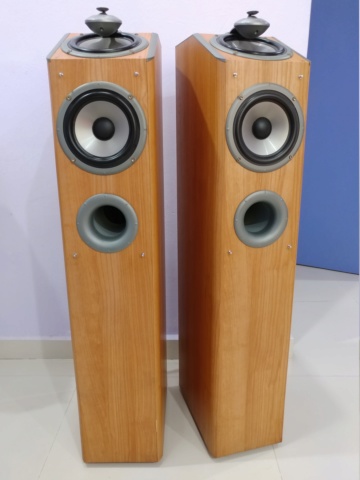 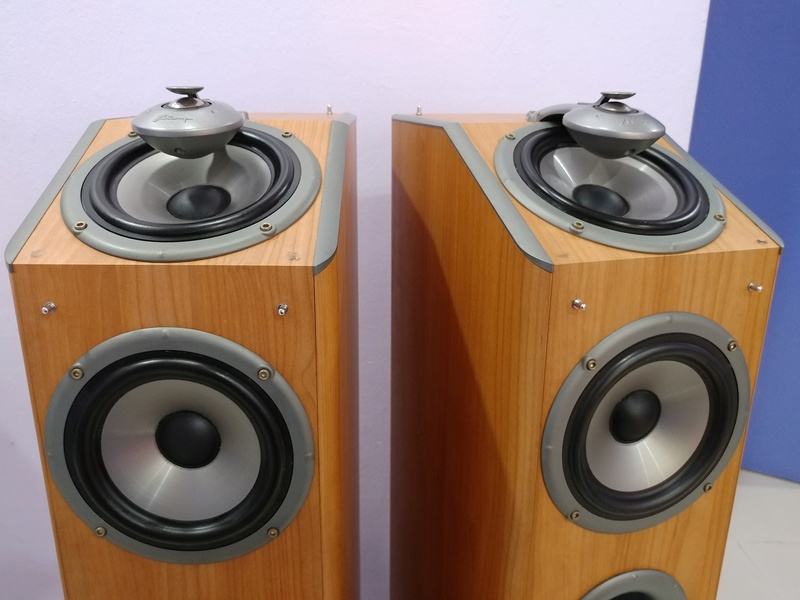 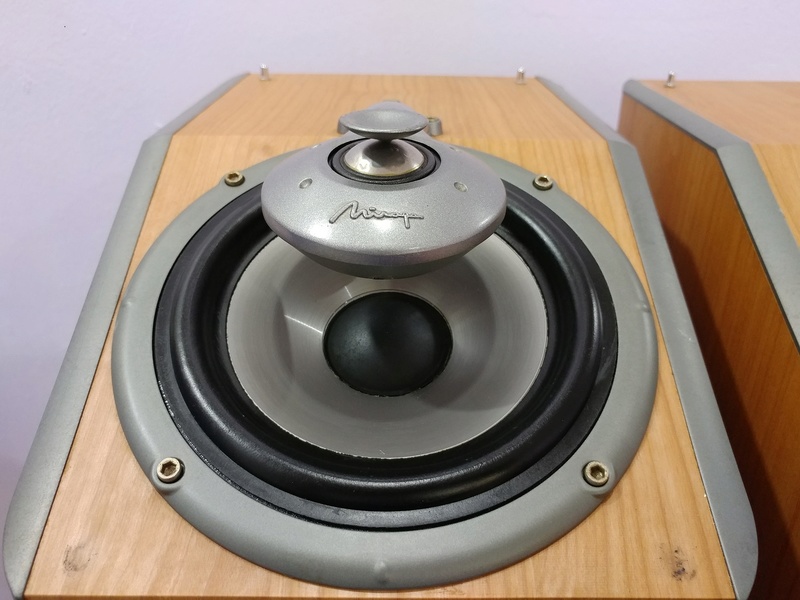 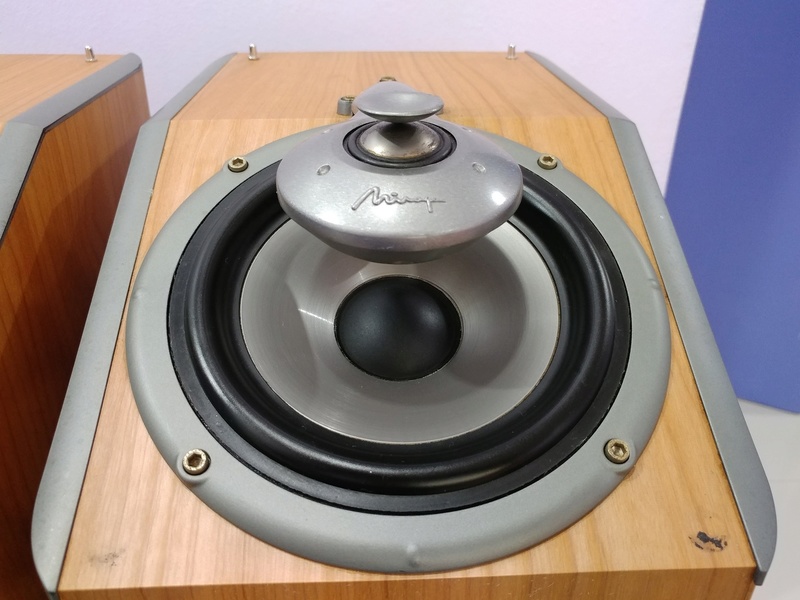 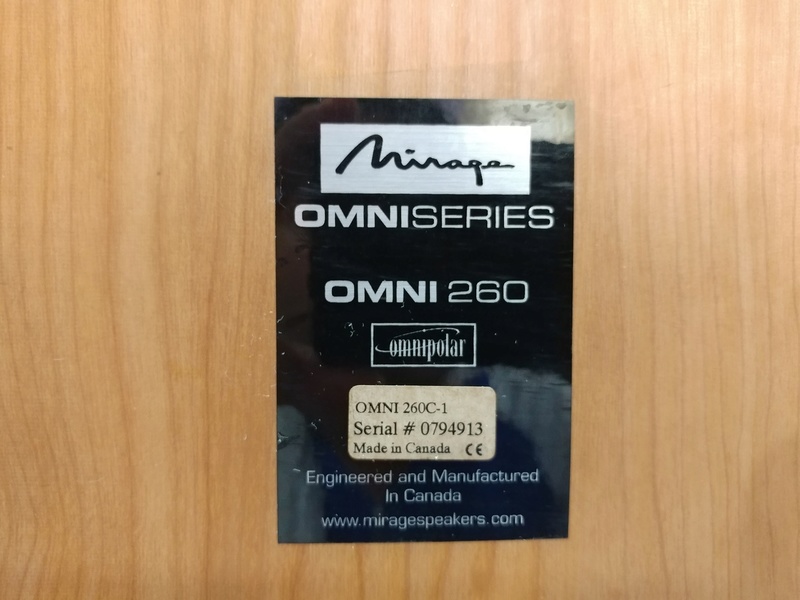 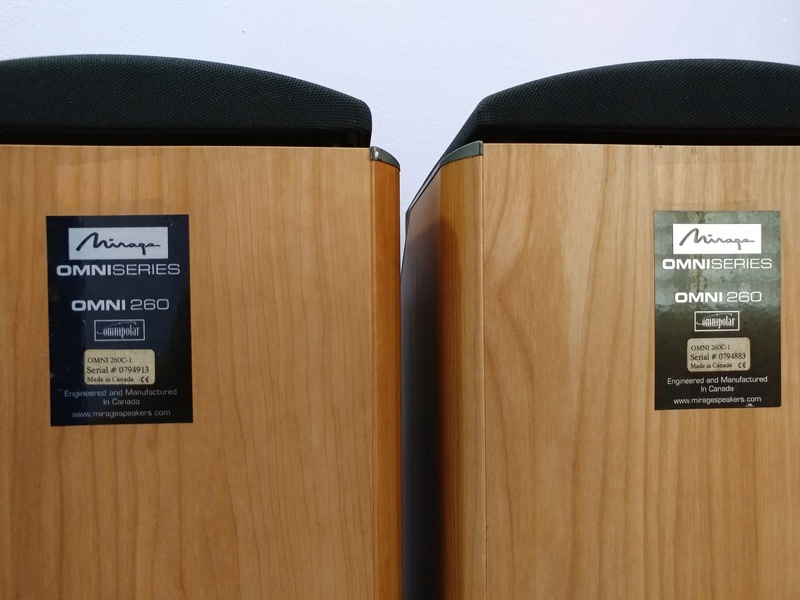 Sound
"Created an enveloping acoustic that filled the room with sound" and showed "what the '260s do best -- present real musicians in a simulation of the environment in which they originally recorded";
"throughout the midrange, the '260s were clear, articulate and uncolored," while "down in the basement the OMNI 260s proved to be chameleons,"
albeit at the expense of some "impact and slam."


Features
"A two-and-a-half way design" that features an "upward-firing bass/midrange driver and the flying-saucer-like OmniGuide above it" on which "the tweeter is mounted…and there’s another spoon-shaped OmniGuide above the tweeter";
according to Mirage, this configuration "simulates the radiation pattern of live music in an acoustic environment."


Use
Jason found that "placing the '260s randomly in my room never resulted in a bad-sounding speaker," but he found "the OMNI 260s to be rather placement sensitive" due to their radiation pattern.


Value
"Their small footprint combined with their big sound makes them an achievement at a very reasonable price."


The OMNI 260 speaker from Mirage,

Mirage’s Omnipolar technology, which uses arrays of speaker drivers facing front and rear in order to produce a spacious, enveloping sound,
is an expensive technology to implement, as it requires twice the number of drivers compared to a conventional speaker of similar dimensions.
So when Mirage decided to implement the Omnipolar concept in the less-expensive OMNI line, designer Andrew Welker felt that an important first step was to replace the dual-driver configuration with a single driver for each frequency range.
The OMNI concept, which first made its appearance last year with the OMNISAT, purports to do just this.

Mirage has now expanded the OMNI range to a full line of bookshelf and floorstanding speakers, and the  OMNI 260 is the top model in this line.
Tech description

The OMNI 260 is a fairly svelte floorstanding speaker.

The various accents on the speaker, such as the trim ring around the woofer, are made of a matte plastic that looks like, well, what it is.
This material is also used as edging on the top surface of the cabinet and for the feet that extend out to the sides as stabilizers on the bottom.
The feet, which hold spikes, didn’t look like they’d be very rigid, but ended up being surprisingly so. Mirage deserves bonus points for the quality of their binding posts.
These single-wired terminals accept spades, bananas and bare wire, and are of superb quality.

Overall, the OMNI 260 looks smart for the asking price,

Internally, there’s a lot going on with this speaker. The OMNI 260 is a two-and-a-half way design, with the front-radiating 6 1/2" woofer crossed over at 700Hz,
while the upward-facing 6 1/2" driver (they’re both identical units) is run up to 2kHz.
At this point, it hands off to the (again) PTH (Pure Titanium Hybrid) dome tweeter. The OMNI 260 is rated as an 8-ohm load, with a minimum of 4 ohms, and its stated efficiency is 93dB.

The most obvious departure from the design of a standard front-firing dynamic loudspeaker is the OMNI 260's upward-firing bass/midrange driver and the flying-saucer-like OmniGuide above it.
The tweeter is mounted on the top of the midrange’s OmniGuide, and there’s another spoon-shaped OmniGuide above the tweeter.

Both OmniGuides serve the same purpose: They reflect sound outward in an essentially omnidirectional pattern.
What’s not immediately obvious is that the OmniGuides aren’t completely centered above their respective drivers.
Instead, they’re canted upward and backward a few degrees, which results in more sound being dispersed to the front of the speaker than to the sides and rear.
The bias is specified as 70% reflected sound and 30% direct, which, Mirage claims, simulates the radiation pattern of live music in an acoustic environment.

While the tweeter points pretty much vertically, the midrange is angled toward the listener. The exact angle of the midrange’s tilt was carefully chosen by Mirage in order to best reconcile imaging with soundstaging. According to Welker, when the midrange pointed vertically, the soundstage was huge, but the imaging was diffuse. "A ten-foot wide guitar just isn’t realistic," said Welker.

The final angle chosen for the OMNI midrange/tweeter array is optimized so that the omnidirectional dispersion results in a large soundstage while the forward bias ensures that images retain their solidity.

» YAQIN MS-300C 300B Vacuum Tube Integrated Amplifier (Used)
by choyaudiovisual Yesterday at 11:00 am

» Luxman PD375 TT with built-in vacuum disc stabiliser
by jbashok Yesterday at 10:19 am