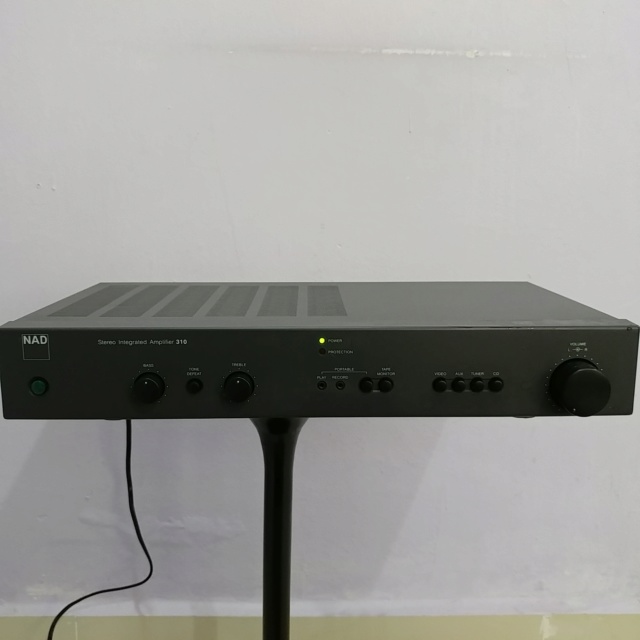 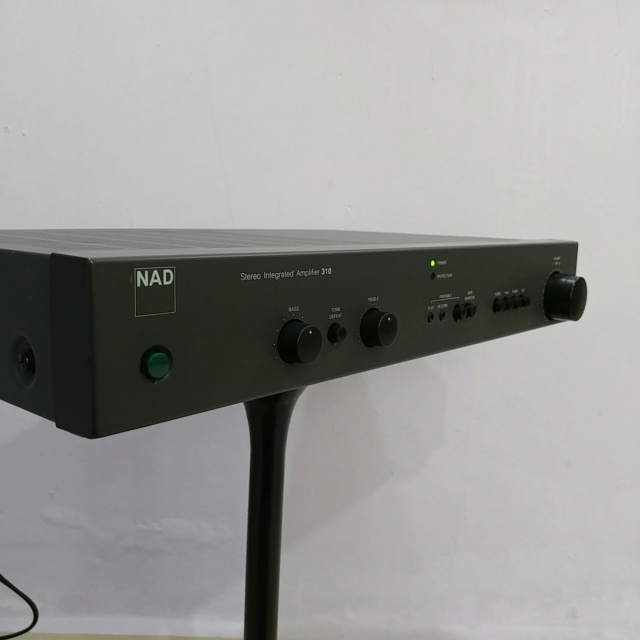 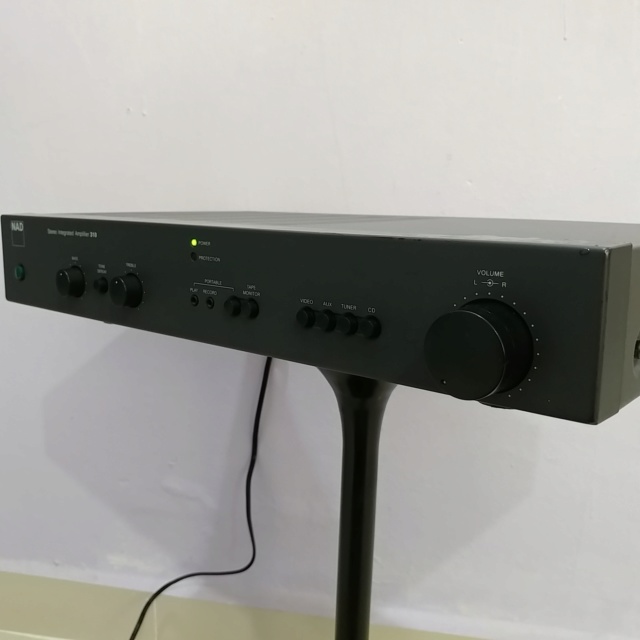 Price : RM450
Contact Simon Ting 012-3612507
Since NAD was founded in the early Seventies, the company has been noted for the high quality and value of its audio and video components. Typically devoid of frills and unnecessary features, NAD products are designed and engineered in England and manufactured in the Far East.

The NAD 310 amplifier is an excellent example of the company's product design philosophy in action. A compact integrated stereo amplifier, it is conservatively rated to deliver a modest 20 watts per channel into loads of 4 to 8 ohms (from 20 Hz to 20 kHz) with less than 0.05 percent distortion. The NAD 310 has pushbutton input selectors for four line-level audio sources identified as video, aux, tuner, and CD.

Recognizing the diminished role of LP's in today's music systems, NAD did not give the amplifier a phono input. Replacing that feature, however, are front-panel input and output mini-jacks (Vs inch) for portable CD/tape players and recorders. There are also tape play and record inputs on the rear apron for use with conventional tape decks and two front-panel tape-monitor buttons, one for each input/output set. It is even possible to dub tapes, in either direction, between decks connected to the front and rear jacks.
The NAD 310 has the basic front-panel controls: bass and treble tone adjustment (with a tone-defeat button) and large concentric volume knobs for the left and right speaker channels, which normally operate as a single control but can be set independently. The front panel also has a pushbutton power switch and two small LED indicators (green for power on, and red to show that the amplifier's protection circuit has been tripped by overheating or a short-circuit).

The amplifier has the same dark gray and black finish that has been a hallmark of NAD products since their inception. On the rear apron, in addition to the phono-jack inputs and outputs, are two pairs of multiway speaker-output binding posts that accept dual banana plugs as well as wire ends or spade lugs.

NAD's goal in designing the Model 310 was to achieve a high-current output at lower cost than traditional amplifier designs. The 310's "Super Simple" circuit departs from the typical circuit topology in several respects, resulting in roughly a 50-percent reduction in the number of components and almost 20 percent greater efficiency. These savings allowed NAD to use higher-quality components in the Model 310, including a toroidal power transformer - possibly unique among amplifiers in this price (and power) range - that is not only more efficient (cooler) than an equivalent conventional transformer but also creates a much weaker external magnetic field (a potential source of hum in audio systems).

Our tests confirmed the performance specifications of the NAD 310, including its extraordinarily low noise level of -96 dB relative to a 1-watt output. Although 20 watts in this day of super-powerful amplifiers might seem skimpy, that is not the case here. Higher power is most likely to be required only for brief intervals, and the Model 310 can deliver twice its rating for the standard 20-millisecond duration used for dynamic-headroom measurements.