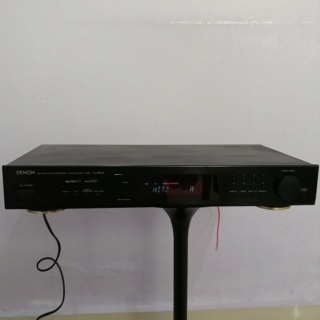 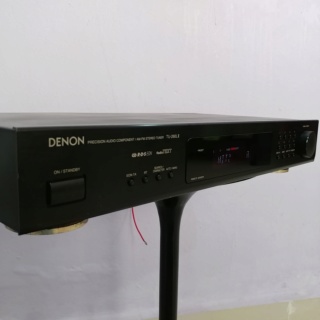 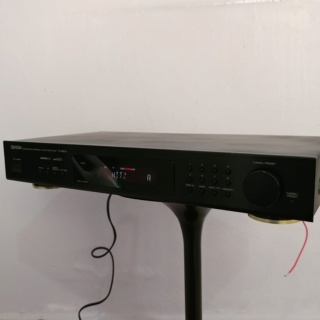 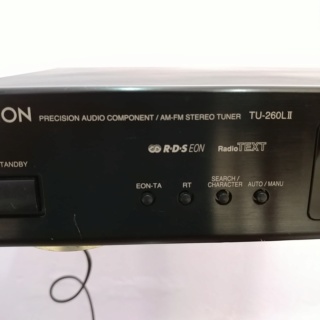 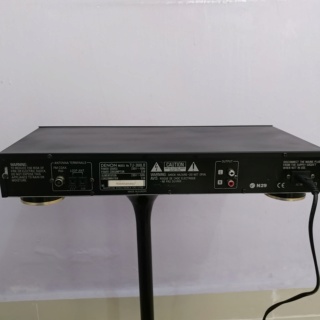 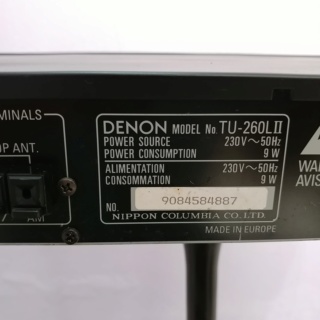 Made In Europe
An audio classic that has provided high quality sound at a very reasonable price for many years, the Denon is a very important benchmark for hi-fi tuners. The TU-260L II is the smallest tuner here measuring just 434x75x239mm and weighing 2.5kg. At the front is a basic, though good display which is clear and visible, a lightweight but precise rotary tuning knob, Tuning/ Preset button to the right and twelve buttons to the left of the knob controlling eight presets and Display/ Memory/ Band and Shift-Pty (for automatic RDS named station select). To the left of the display are four buttons to control, Auto/ Manu (tuning), Search/ Character, RT (radio text), EON TA..

The black all aluminium casework is satisfactorily built for the price but is rudimentary and dated to the late nineteen eighties. Internally it features Denon's linear power supply, Mitsumi FM module and a small frame type transformer. There is a large 2,200 micro farad capacitor and several smaller value ones spread across the circuit board, all by SMG. At the rear are connections for AM, female coaxial socket for FM, phono sockets and figure-eight mains input socket.

With Radio Two FM, the Denon had a warm overall sound, yet it was never cloyingly tepid either. Rather it presented the music and speech with a well-rounded feel that invited longer listening sessions, crucially, without inducing lethargy and subsequent attention deficit to the sound. The speech was very slightly sibilant however, and compared to our reference, the Denon also had a more internalised presentation. However, for the extremely reasonable asking price, it was possessed of a dynamic ability with both music and speech. It was expressive too, while the bass was quite extended but mostly tuneful.

Treble was also suitably sophisticated providing nice texture to both guitar and orchestral stringed instruments. Vocals had a minute amount of sibilance to the treble regions and though the sound was a little internalised compared to the Cambridge, I found the Denon was still enjoyable none the less. For Radio Three FM, the Denon's spatial awareness was very good with the orchestrations. The sound was controlled and tidy without any tangible nastiness - where the horn sections had a nimble presentation because the timing qualities of the Denon (on both Radio Two and Radio Three) was excellent.

The Denon performed well in this test and is to be commended. In use it was a pleasure, being precise in tuning through its rotary knob and easy to discern display. The sound quality was also at a similarly excellent and pleasurable standard considering its low price. It was warm and weighty yet dynamic and engaging too! It was let down slightly by the dated finish and some cheap plastic feet, but this is only a small gripe and is excusable as it is a genuine low-cost hi-fi tuner.

This tuner has been a benchmark for budget vhf/fm tuner performance for a decade or more and has a deserved reputation. It now has, in Denon TU-260L II form, a flat frequency response as our analysis shows. There's still a small top end roll down, above 8kHz, to ensure the sound stays smooth. Pilot tone rejection by a deep filter is high, as is sub-carrier. Under test there was little intermodulation distortion from this source as a result.

Harmonic distortion levels at 50% modulation are consistently around 0.15%, a fine performance. Our analysis shows 0.3% on a centre image signal (R+L) at 100% mod., with second and third harmonics only.

The Denon is sufficiently quiet at -73dB for hiss to be nearly inaudible. However, it needs 1mV for this, which in most locations demands an outdoor aerial. Sensitivity of this sample seemed relatively low, as 47uV was needed for stereo with -50dB hiss (IHF stereo sensitivity).

The TU-260L MkII remains balanced and well specified, measurement shows. It needs a good aerial for best results though.