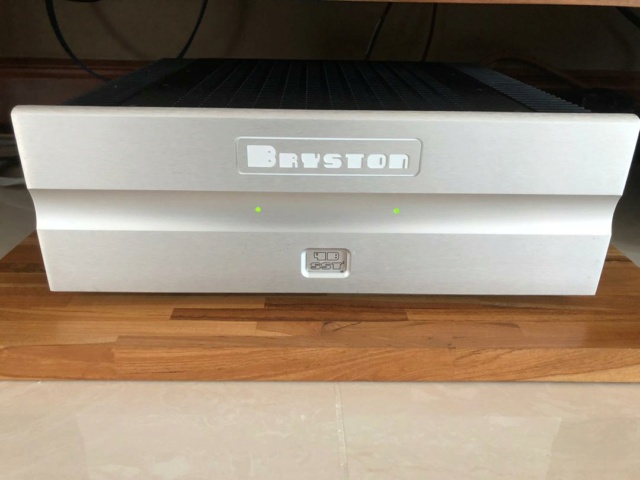 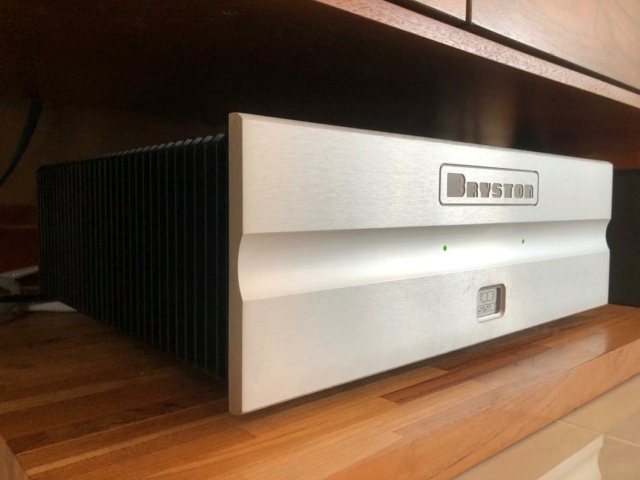 
Bryston Ltd. is a Canadian company which has been designing and manufacturing audio equipment for over 35 Years. While there are many companies competing in their market, Bryston’s gear is coveted by enthusiasts and professionals alike. They have earned the reputation of providing bullet-proof reliability, high performance and value. Byston’s value is not due to a bargain basement price. You won’t find them at the local Wal-Mart.

It’s the sound and their 20 year guarantee of high performance that can make a Bryston purchase a value. This remarkable warranty speaks to Bryston’s confidence in their own quality standards, and it is definitely the exception versus the rule in the A/V industry.

One thing before I dive into the review, this is not my first experience with Bryston. I have owned and enjoyed a Bryston 3B amplifier for years. I believe mine (#33872) is nearing its 25th birthday and has started to show its age. It has developed a bit of hum that can be detected in the background in quiet musical passages (…. perhaps I’ll contact Bryston for a rebuild …hmmm another article before and after?????) Anyway, when I saw that one of their current amplifiers was available for review, a 4B SST2, I jumped at the opportunity to take a look.

I’ve worked in both the automotive and consumer electronics industries as an engineer for over 15 years. Over that time I’ve been exposed to more than my share of electronic design. With that in mind, the build quality typically exemplified by Bryston never fails to impress me. Let’s take a look ‘under the hood’ at the 4B SST2 to see why.

Mechanically, the main electronics chassis of the 4B SST2 is constructed of panels of eighth inch thick anodized aluminum. To put it in perspective, the panels are roughly 25% thicker than a quarter (try bending a quarter). You simply don’t find this type of heavy duty construction in most if not all consumer electronic products typically found down at the big box retailer. Attached to the sides of the main chassis are massive heat sinks sized to passively cool the amplifier. No fans are used on this big boy to add even a touch of unwanted noise to your system. Bolted to the front of the main chassis is an impressive hunk of half inch thick aluminum. This plate houses a jeweled-style power switch. On my sample this half inch thick panel is also used to rack mount the amplifier.

The back of the chassis contains the inputs, configuration options, and outputs for the amplifier. Both balanced and single ended (RCA type) signal inputs are represented. A magnetic-trip circuit breaker is in place to protect the amp. Configuration switches for remote power up are provided. Switches are also provided to tune the input sensitivity based on the signal input selected. Finally, heavy duty 5-way binding posts are provided for connecting your speaker wire (all the way up to ‘garden hose’ in diameter). I’ve used similar WBT binding posts in some of my projects and these posts alone can be quite costly.


The only disappointing detail on the mechanical build was Bryston’s decision to mount the RCA inputs directly to a circuit board without mechanically connecting the input to the amps’ chassis. Every insert of an audio cable will unnecessarily stress the circuit board. In fact, if someone is ham-fisted enough I could see a crack developing. In typical use this should not be a big deal; however, the design is not as bullet proof as the rest of the other signal inputs and outputs which are mounted directly to the chassis.

Electronically, the Bryston 4B SST2 is a dual mono design (go ahead and check the schematic on Bryston’s web site to confirm if you wish!). This basically means that there are two independent amplifiers housed in the single chassis. The dual mono design can be clearly seen in the photo.


Notice the two toroidal power transformers (the ‘donuts’) top and center feeding mirror copies of the remainder of the amplification circuitry. An individual copy of the amp components (as would be typical in lower end products) ensures that each channel of amplification works independently of the other. Musical peaks in the left channel do not steal power from the right channel and compromise dynamics. Moreover, music won’t bleed through (or crosstalk) from one channel to the other smearing and compromising the sound. In sum, this design can lead to better musical reproduction – especially when the amplifier is pushed hard.

Somehow, I doubt this dual design would be an Energy Star approved green solution since it consumes 170 Watts at idle and up to 2100 Watts at full throttle, but sometimes you can’t compromise if you want top performance. In a nod to the environment, I’d recommend using a switched power outlet to prevent any parasitic power draw.

Power from the 50 pound 4B SST2 is rated at two 300 Watts channels into 8 Ohm load (i.e. a speaker), two 500 Watts channels in 4 Ohm load, or a massive 900 Watts in to a single 8 Ohm load. While Bryston itself offers more powerful (and expensive) amplifiers, the 4B SST2 power capacity should be more than adequate for most users.

The damping factor of the 4B SST2 is over 500 at 20 Hz. What does this mean? Let me try to simplify with an analogy. When you try to stop a Corvette ZR1 with high performance brakes, it stops – now. Like the Corvette, when the Bryston puts on the brakes, the speaker stops – now. Based on the rated damping factor, the Bryston should tightly control the movement of the speakers – especially with respect to bass reproduction. This tight control should be heard as quick transients in bass. A quick slap of a drum in a recording will be a quick slap of a drum reproduced by the speaker. Not a slap followed by a decaying echo as a poorly designed amplifier struggles to control the speaker driver.

While none were in quite the same league as the Bryston price wise, I did my best to support the Bryston with quality gear. Driving the 4B SST2 was the Marantz 7002 receiver that I reviewed earlier this year (available here). This receiver does not offer a balanced output, so I used the old stand-by; unbalanced RCA interconnects, between the Marantz pre-amp outputs and the Bryston. Cable length was a short 4 feet so this was not an issue. The cable type was a Monster Standard THX certified cable.

For the source components I used my Yamaha CDC-835 player. It was connected to the Marantz via a Monster Standard Digital coax THX certified cable.

Finally, I decided to listen to stereo sources exclusively in the review so I could focus on the performance of the Bryston as much as possible. With this in mind, I used the Pure Direct mode of the Marantz and disabled all other speakers including the subwoofer to eliminate any sources of extraneous noise. The speakers I used were my Infinity Beta 50 towers running in full range mode. The review of these speakers is available here on Secrets. Speaker cable was Monster’s Ultra Series THX certified cable (What can I say – Monster was on sale).

Shall I just cut to the chase and say the 4B SST2 sounded great? OK maybe a little more detailed praise is required. However, in my defense, even my wife whose normal response to new gear is “sounds nice” commented on how she enjoyed the Bryston. As is my common practice, I was bouncing through different musical genres as part of my review process. When my wife walked in, I happened to be

Jonny Lang - Lie To Me

Listening to “Darker Side” by Blues Prodigy Jonny Lang. This is track 2 from his Lie to Me album. “Darker Side” features a drum kit, piano and of course Jonny’s Guitar and vocals. Her description of this track was “smooth, clear and precise even with this gritty voice”. I agree. It sounded like the band was in the room with us. The piano notes were sharply defined and sounded just like the piano I was forced to play growing up. The bass notes from the drum kit struck quickly and were tightly controlled. Higher frequencies were clearly reproduced, the cymbals for the drum kit sounded sharp and decayed naturally.

Finally, what struck me was how intelligible everything was on the track. All the nuances from the various instruments to Jonny’s voice were easy to pick out.

As noted earlier, I moved through a number of genres and artists while listening to the 4B SST2. I stopped at some songs that I was intimately familiar though may be new to you such as “The Company”, track 4 from Vigil in a Wilderness of Mirrors by Fish (no, not Phish). This dramatic sing along ‘bar song’ sounded almost new to my ears with this setup.

Fish - Vigil in a Wilderness of Mirrors

I also spent time listening to an artist almost everyone knew, Michael Jackson.

With his recent death I went back to listen to some of his greatest hits from the Thriller and Bad albums. Maybe its just nostalgia, but the catchy beats on “Billy Jean”, “Beat It”, “Smooth Criminal” etc. sounded even better that they did on my first 100 dollar Fisher boom box in the 80s – if you can believe it. I pushed the Bryston hard with these tracks at ear splitting and wall shaking volume levels. With the house itself keeping the beat, the Bryston handled Michael with aplomb, just barely warming up. Hearing and enjoying these familiar songs on a system better than any other I have owned, thanks to the Bryston 4B SST2, was my own small tribute to Michael’s influence on today’s music.

If you’ve read this far your probably at least curious to hear whether the Bryston 4B SST2 should be added to your system. I’d say yes. There is no doubt that the Bryston is expensive – at least for people like me. But what of lasting quality is cheap? What have you purchased that you fully intend on using and enjoying the next 20 years? Your car? Not too likely if you drive an average 10-12 thousand miles a year. Your home? Well, I suppose. But living that long in one place is hardly a certainty these days. Perhaps a fine Rolex watch will be on your wrist for 20 years. Even in rapidly changing world of home theater, if you choose a 4B SST2 Bryston amplifier, you are likely starting a 20 plus year love affair.

» Copper Color S6-RH Power Distributor (US Socket)
by HIFI Illiterate Today at 10:25 am